…..19 Arabs did not bring down the Twin Towers; controlled demolition did! Did the 19 Arabs also roam around the WTC to rig it with thermite?

I was shocked and worried when I read this on Andrew Anglin’s site and wrote him for clarification:

“Well, it’s been 15 years since 19 Moslems, mostly from Saudi Arabia, blew up our towers [WTF?] and George W. Bush declared ‘war on terrorism.'”

He wrote back to me and issued this welcome follow-up blog to clarify his position:

This is the exact and precise Michael Moore/Alex Jones/David Duke & Don Black line, and Andrew Anglin is now overtly in bed with the latter two, as even a cursory glance at the DS website shows. 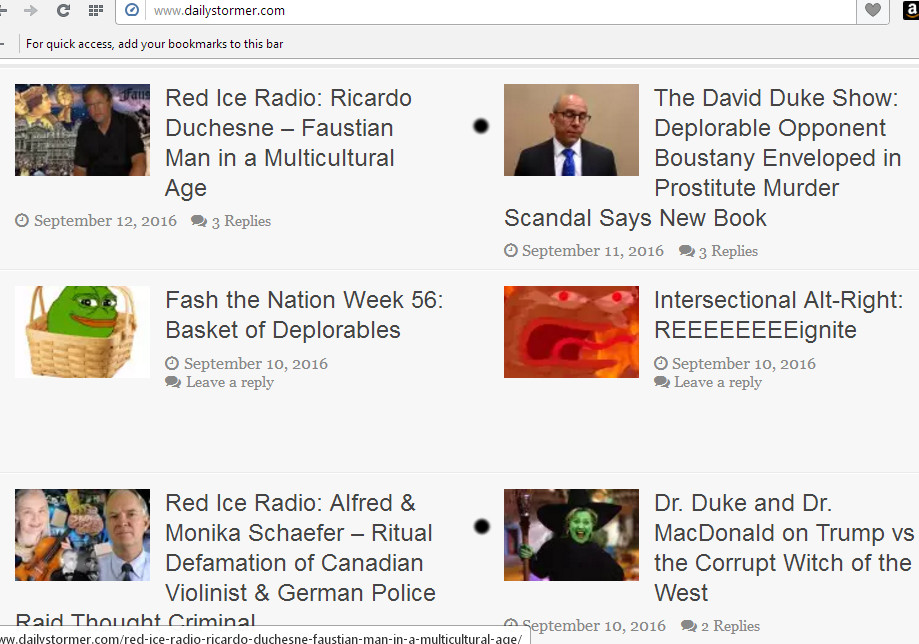 I am at open war with both David Duke (whom I know personallky very well, and have since 1989) and Don Black, whom I also know, and their wives, girlfriends and kids, as being federal AGENTS.
Besides my personal knowledge of Duke, I was with his ex-girlfriend and campaign ally 1989-91. She was not anti-Duke, just disappointed, but I learned a lot about Duke the person, whom I had moved to Louisiana in 1989 only to help and learn from. 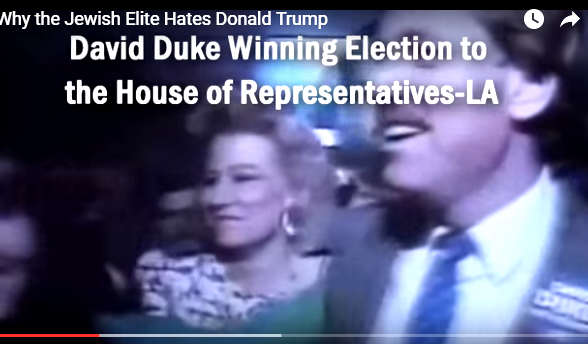 with me in 1990, running for Congress in Tennessee (I nearly won!) 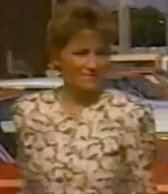 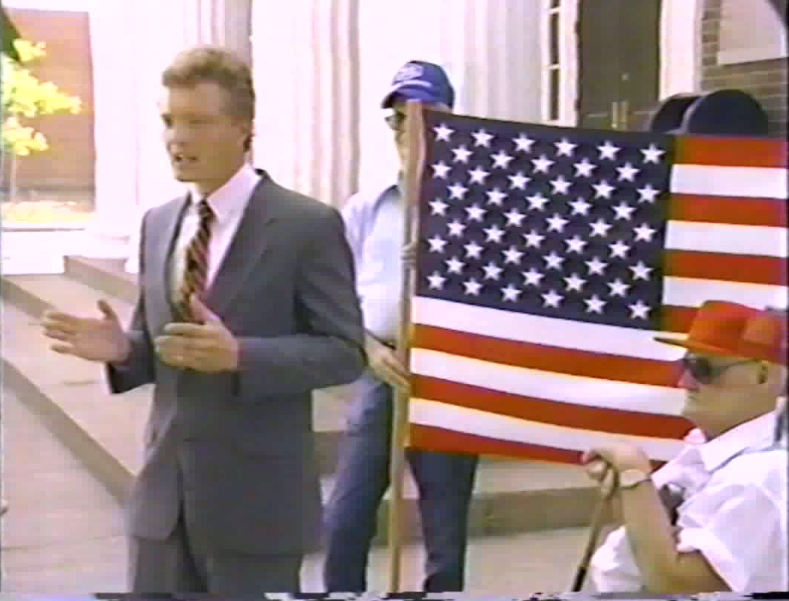 The Duke-black machine began to wage war by defamation against  me in March 2009 — the very day the feds “”arrested” my assistant, Henrik Holappa (now a race-mixing antifa!) In fact, Black, a cowardly machiavellian, had his minions go online and BLAME me for the Holappa arrest!
All this came after I had been very supportive of them both, had helped save their embattled 2008 conference by driving 900 miles to speak there, 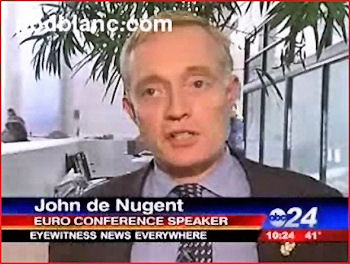 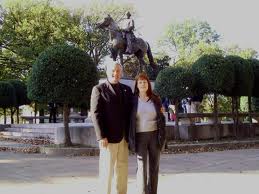 Duke behind podium monologuing; me second from left; Black far right: next to Duke with his Russian mistress Maria, a lawyer. (Margi and I spent a week with them in Austria in February 2007.) The Finn Henrik Holappa is standing far left, next to me, and was joined at the hip with Duke, defaming ME online and doing videos with him, until April of this year, when he suddenly announced he was an antifa. https://johndenugent.com/?s=holappa (When his  fellow WNs no longer trusted or liked him, and voted him out as their head in his native Finland, he decided “à’ve accomplished all I can as a WN” and openly went over to the Jew enemy for a second career, now opposing us.) 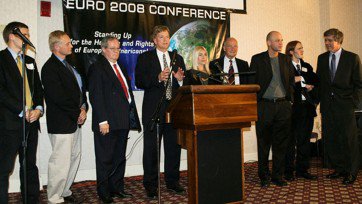 Duke’s ally against me now comes clean and says he has realized neo-nazism is evil and “Hitler was the worst criminal of the twentieth century”…. 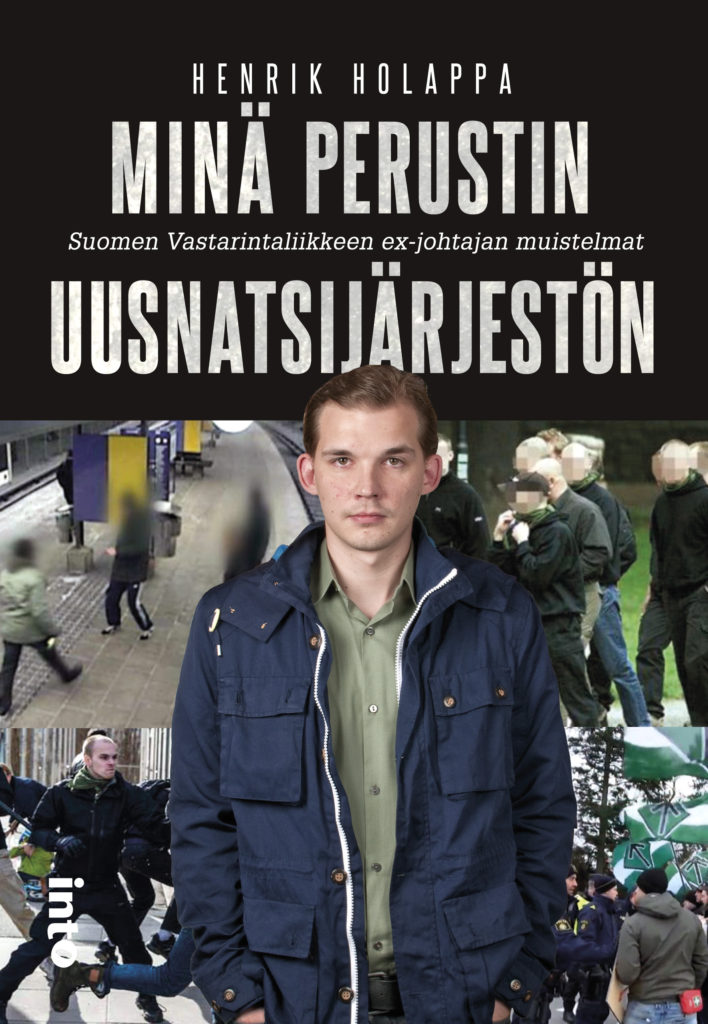 Duke’s ally in the war on John de Nugent, Holappa, dropped his old white wife and four kids and now has a new wife, living near Helsinki airport and working for an anti-hate speech organization. 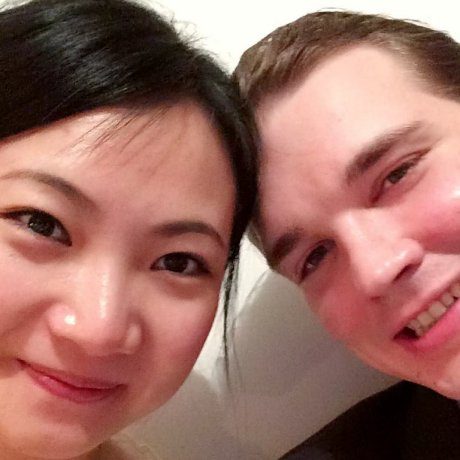 Also, I had a massive “thread” on Stormfront (which I wrote and people reacted to) with 264,000 views!
Black just up and deleted it, calling me a mentally ill con man who wanted Holappa arrested so I could cash in on donations to a Free Holappa legal defense fund! And Duke called his common-law wife in Sweden in 2010 to lie that I had done exactly that, Black’s defamatory remark, just as Holappa’s wife wrote to Margi!
WTF?

….Well, this one sentence by Anglin about Saudi muslims doing 9/11 ….

…..seems to attack the truthful and masterful 2008 911MissingLinks documentary.
https://www.sonnenrad.tv/channel/video/911-Missing-Links-How-israel-did-the-September-11-attacks-on-America-by-Mike-Delaney/dca2b2a4d91587655980dc2d0d3e52a4/3

However, I must point out that a bit over halfway down in this same Anglin article I do find this sentence….
“There is also a real possibility that Israel itself planned or assisted with the 911 attacks.”
In fairness also, the comments by readers under the Anglin article are all about how the Jews were behind it.

So is Anglin is having it sort-of both ways…. and maybe going both ways just for now?

Is he going to gradually tone down the Jew authorship of 9/11 until it is totally gone and go full-Duke/Black on this? I hope not, because I really admire Anglin.

Hey, goy, this is your true enemy. 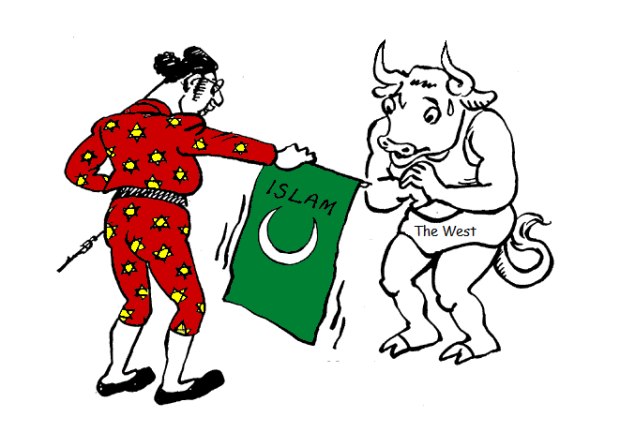 Mike Delaney on how the Jews did 9/11, not muzzies:

……I wrote Anglin after his second, clarifying blog

You know I have great respect for your talents and achievements. I hope you will remember this famous quotation, however, as you climb the ladder of greater success:

Mark 8:36 What good is it for someone to gain the whole world, yet forfeit their soul?

You are, to my regret, partnering with people whom we of the older WN generation have known to be crooks for decades.

And I write this as someone who really, really KNOWS David Duke, Don Black, their wives, their kids, and Stormfront.

In the year before you were born, Andrew, 1983, I sat in Dr. William Pierce’s office and he tossed a leaflet from David Duke at me with a snort of disgust. 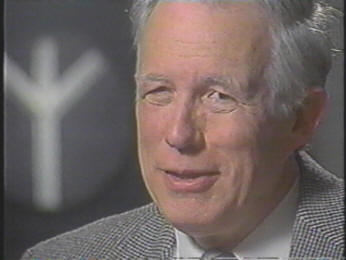 “Look at this, John. He plagiarized every word, and even the graphics.”

I remember well back in 1983 how Dr. William Pierce expressed to me his lividity over Duke stealing the entire content of his famous jewsmedia exposé “Who Rules America” (a laborious, accurate, and welcome list of every Jew owner, reporter or executive in the US media by title, company and year of hiring ” he did not CLAIM the Jews own and run the media; he proved it with names, companies, and job positions.

This lazy, lying, conniving, gambling skirt chaser and blower of campaign donations had published it under his own name.

Pierce was not happy at this blatant plagiarism of his hard work. Not a word was changed by the lazy Duke in the Pierce text except the name of the author. 😉

And I ask you to maintain at all times a healthy humility. Yes, you have done amazing things.

However, even if you are getting 100,000 unique visitors a day, while that is huge by WN standards, the white USA population is 180 million.

And 99% of them, for all your pizzazz, humor, and brilliant memes & irony strategy, have never even heard of you (or me, or the others on this email list).

There is still the breakthrough that must be achieved. 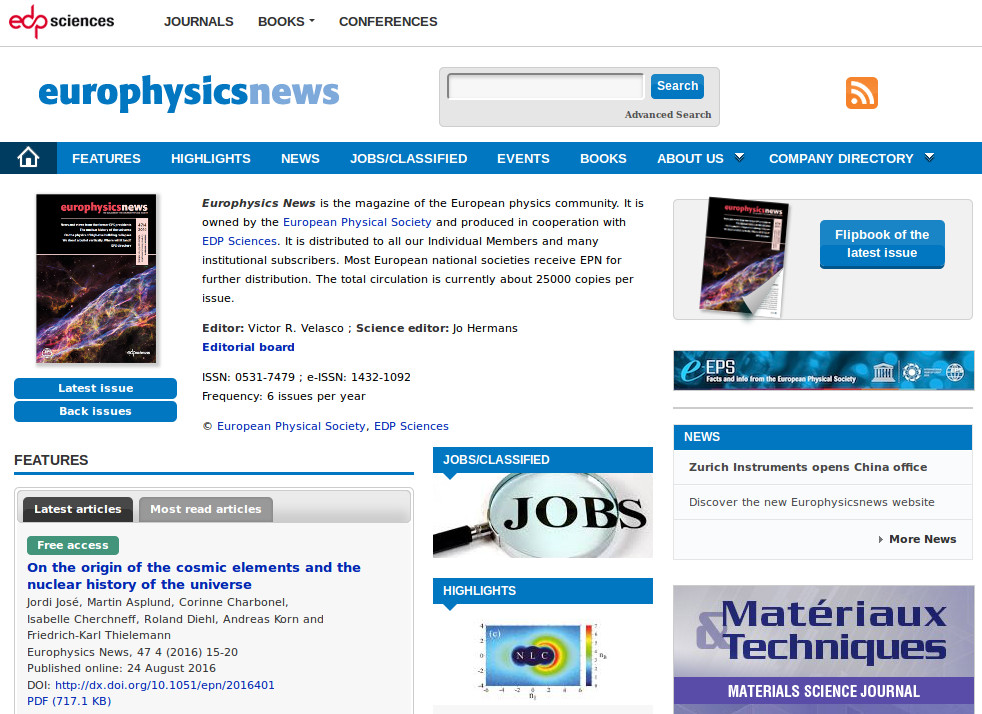 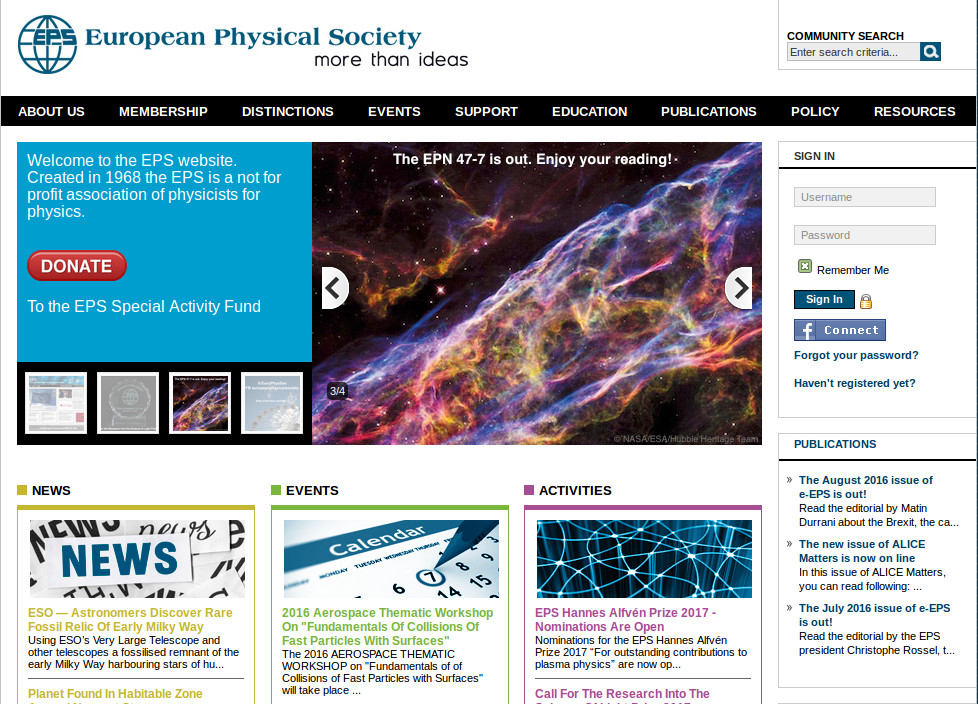 Presidents of this society since 1968 — few or no Jews http://c.ymcdn.com/sites/www.eps.org/resource/resmgr/about_us/EPS_PastPresidents.pdf

…..And who alone had the resources to rig Silverstein’s buildings? 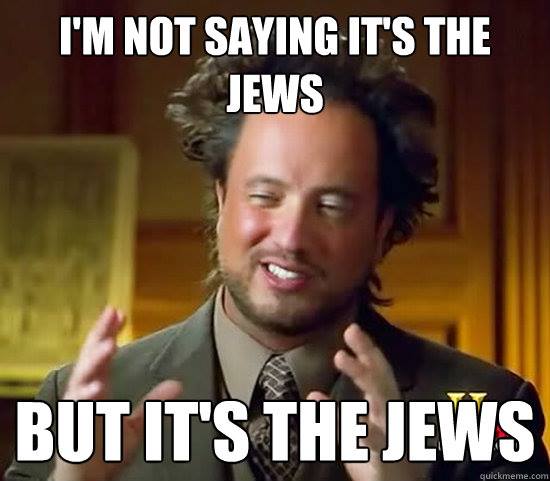 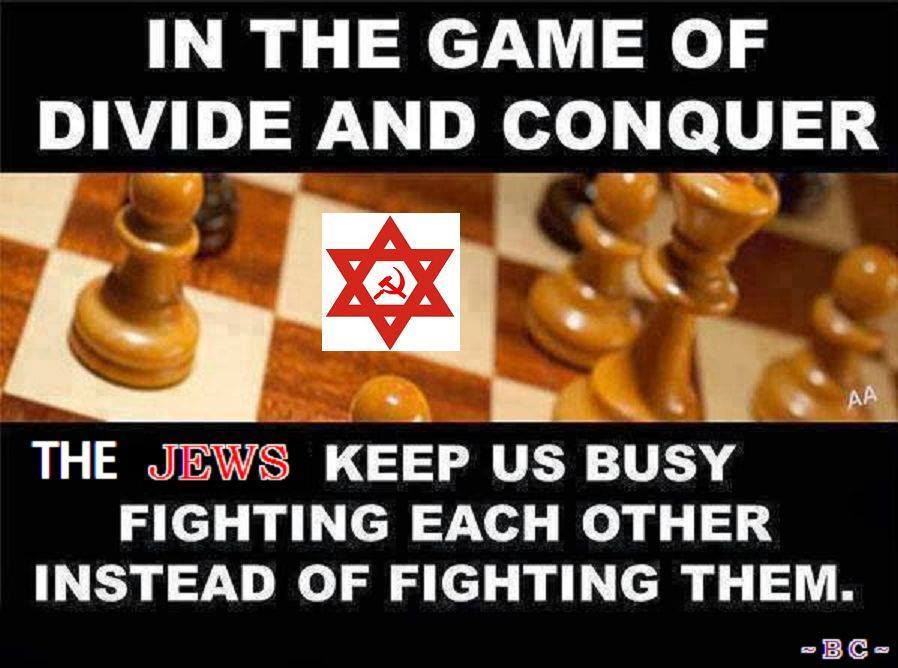